Singapore Is Still The Most Expensive City In The World

Six Creative Strategies You Must Try 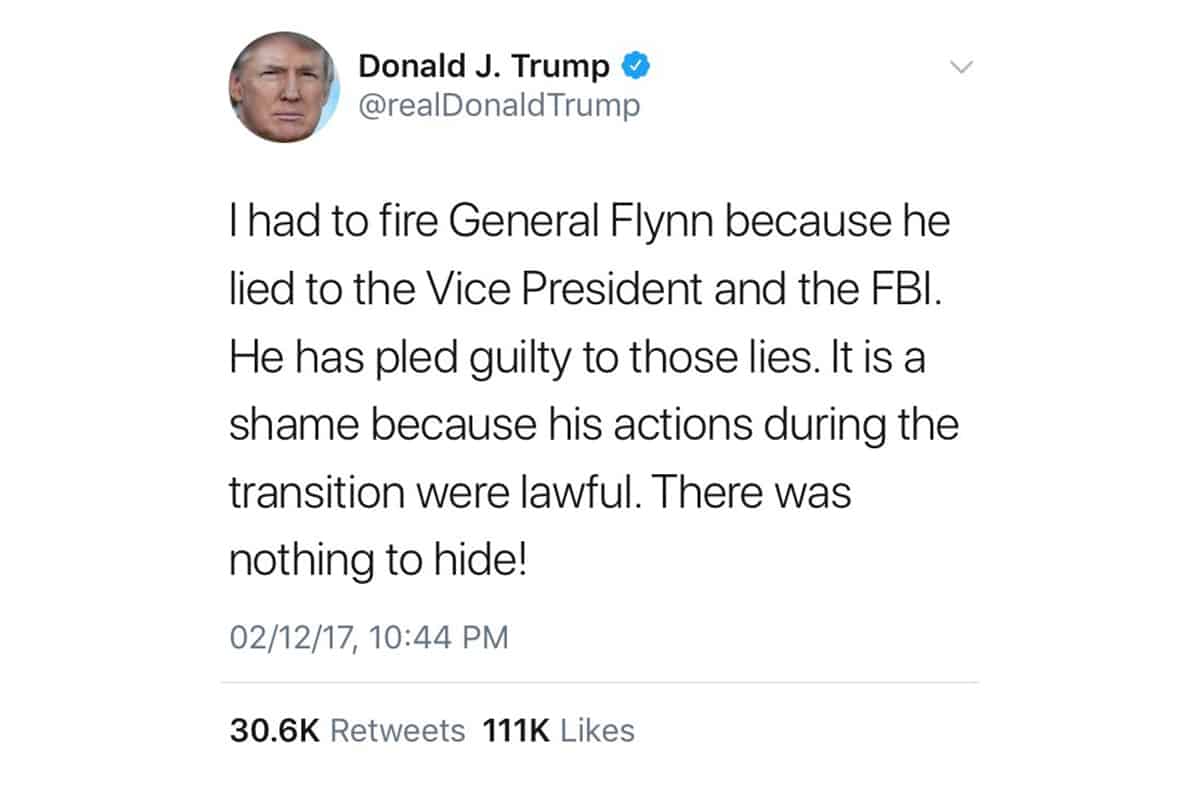 “I had to fire General Flynn because he lied to the Vice President and the FBI,” the Saturday tweet reads. “He has pled guilty to those lies. It is a shame because his actions during the transition were lawful. There was nothing to hide!”

Dowd said he drafted the tweet and believes White House social media director Dan Scavino posted it online. He declined to answer additional questions about whether Trump reviewed the tweet before it was posted.

“Enough already,” he said in an email. “I don’t feed the haters.”

Flynn pleaded guilty Friday to lying to the FBI about conversations he had with Russia’s ambassador to the US during the transition and disclosed that he is cooperating with the special counsel Robert Mueller’s office.

“The tweet was a paraphrase of Ty Cobb’s statement yesterday,” Dowd told CNN. “I refer you to (former FBI Director James) Comey’s testimony before Congress about FBI view of Flynn’s answers.”

However, Cobb’s statement on Friday does not say anything about Flynn’s lies to the FBI being a factor in his firing.
Pressed about whether the tweet signaled Trump knew Flynn had lied to the FBI before firing him, Dowd rejected the assessment.

“At the time of the firing no one including Justice had accused Flynn of lying,” Dowd told CNN. “Yates had reported he told the (agents) the same things he told VP. He was not accused of lying until last week.”

In May, former acting Attorney General Sally Yates told a congressional panel that she had a meeting with White House counsel Donald McGahn on January 26 to tell him that she had information that statements by Vice President Mike Pence, based on his conversations with Flynn, were false. She was joined in the meeting by a senior career official in the Justice Department.

Saturday’s @realDonaldTrump tweet raised immediate questions on whether Trump knew Flynn had lied to the FBI when he fired him in February.

“…just couldn’t resist commenting on Flynn,” Walter Shaub, the former director of the United States Office of Government Ethics, tweeted. “Are you ADMITTING you knew Flynn had lied to the FBI when you asked Comey to back off Flynn?”

California Rep. Adam Schiff, the ranking Democrat on the House Intelligence Committee, tweeted, “If that is true, Mr. President, why did you wait so long to fire Flynn? Why did you fail to act until his lies were publicly exposed? And why did you pressure Director Comey to “let this go?”

Comey said in testimony before the Senate Intelligence Committee in June that Trump pressed him to end the investigation into Flynn. Trump continues to deny this, and on Sunday morning sent a tweet calling it a “Comey lie.”